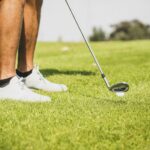 A handy wedge game can cure many woes. No matter how bad your ball striking is on any given day, if you can wedge it close, you can erase tons of errors.

Unfortunately for many recreational players, hitting wedges consistently is not a strong suit. And the biggest culprit for their struggles often comes in their setup.

According to GOLF Top 100 Teacher Martin Chuck in the video above, setup errors often come in the same form. Players use a wide stance, play the ball in the back of the stance, and they push their hands forward. This setup can only lead to bad things as the leading edge is far too exposed, and the swing bottom is inconsistent.

“We want a reliable swing bottom where the club can curve nicely,” he says.

To create a consistent swing bottom, Chuck recommends starting with the footwork. Instead of using a wide base, try narrowing your feet to where your heels are almost touching. Next, focus on placing the ball directly on the center of the stance.

With your feet so close together, it’s easier to find a consistent ball position and for you to bottom out your swing at that point every time.

“Even if I move the ball a little bit forward or a little bit back, it doesn’t matter,” Chuck says. “Because now you have the golf ball centered between your belt buckle, sternum and your neck underneath a nice center.”

With the setup positions in the right spot, all you have to do is “feel the circle” of the swing, clipping the ball at the very bottom.

“Let’s avoid the stabby stance with the handle forward,” Chuck says. “Let’s get our feet together and feel like we can send the golf club with a gentle pace in a circular manner. And then pace and face that event, let the ball get in the way, and you’re going to hit some great shots.”