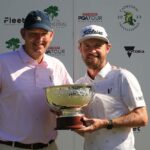 By Tony Webeck via pga.org.au

There is life in the playing career of Nick Flanagan yet after the 2003 US Amateur champion defeated Scott Arnold in a playoff to claim the 2022 Cathedral Invitational at Cathedral Lodge & Golf Club.

One of Australia’s most exclusive golf properties, two hours north of Melbourne, opened its doors to the public for yesterday’s final round and they poured in by the hundreds to watch some of Australian golf’s greatest up close and intimate.

Arguably our greatest ever golfer, seven-time Major champion Karrie Webb, had a two-shot lead with two holes to play but made a double-bogey at the par-3 17th and then dropped another shot at the last to fall to five-under.

That left good mates Flanagan and Arnold locked together at six-under, Flanagan’s par at the first playoff hole enough to clinch the $100,000 winner’s prizemoney.

Once ranked as high as 129th in the world, Flanagan’s career has been in a state of flux in recent years due to both injury and a lack of playing opportunities.

As he did prior to the 2019 Australian PGA Championship where he finished third behind Adam Scott, Flanagan had considered that this trip might be his tournament swansong, victory providing a conversation starter when he returns to his young family in San Antonio, Texas.

“I wanted to come back and I pretty much just said, ‘We’ll see what happens and if it goes great, great, and if it doesn’t then we’ll sit down over Christmas and decide what’s next,’” said Flanagan, (pictured above with Cathedral owner David Evans).

“It’s not the first time I’ve done that – the last time I did it I finished third two weeks in a row. Maybe there’s something to that attitude of kind of knowing it’s not that big a deal if I’m not going to play golf as a career. It really just lets you go out and free-wheel it.

“With two kids now, every cent counts. For me to keep chasing these tournaments and spending the money to come over, if you don’t perform it goes really quick and your priorities change.

“This will definitely give me a little bit of breathing room to be able to come back and play a little bit next year, the events at the beginning of the year, and hopefully bring the family with me which we haven’t been able to do with how expensive it can be.

One shot behind at the start of the second round, Flanagan bridged the gap with a birdie at the par-4 first hole. He followed that up with another at the fifth and then dropped a bomb for birdie on the par-4 seventh to move to six-under.

A birdie at 11 was countered by a bogey at 15, his trusty putter proving the difference on the lightning-fast Cathedral greens.

“I was just consistent. I wasn’t hitting any really bad shots or many really good shots but I just knew if I could get myself on the green or close to the green that my putter was going to do the rest,” said Flanagan, a four-time winner on the secondary Korn Ferry Tour in the US.

“There were so many difficult putts from 50-60 feet out there. They’re hard enough at the best of times but when the greens are rolling as fast as they were…

“I made an absolute bomb down seven, which could have gone 15 feet by or five feet short. You need those lucky breaks to get a win.

“It was just one of those weeks where things kind of went my way.”

And although his playing future remains somewhat clouded, Flanagan has declared himself a certain starter for the 2023 Cathedral Invitational.

“I’m pretty sure you can put me first on the list to be back next year for sure. Hundred per cent,” he added.

Webb (70) shared third place with Sydney’s Grace Kim (70) while Marc Leishman closed with two straight birdies in his round of three-under 69 to snare fifth outright.

Round of the day belonged to Gabriela Ruffels, who had six birdies in her round of four-under 68, setting a new women’s course record in the process.