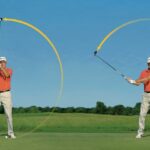 There’s a good reason why people who slice the ball want to fix it: Because on the road you take to playing good golf, nowhere is there a slice. You can go from hitting a hook to playing good golf, but if you don’t learn how to stop hitting shots with an open clubface, you won’t get very far.

The unfortunate reality is that a large majority of players–maybe 90 percent–struggle with a slice. They don’t have a good grip, they make a steep swing into the ball, and they don’t understand how the hands work in a good release. Those things combine to produce high, weak shots to the right.

One teaching strategy that has always worked for me is to figure out a student’s major flaw and devise a plan for practicing the opposite of that flaw. Exaggerate the fix as much as possible; really feel the change. That’s how my new slice drill was born. Slicers everywhere need an easy way to feel the correct path and plane. My three-step drill will get you feeling a radically different swing shape, starting by tracing backward circles in the air. (I’ll explain.)

After five minutes practicing the three steps (first we’ll check your grip and driver specs), you’ll be finding the left side of the fairway. It works every time.

Get A Driver That’s Fit For The Job

Before you make your first practice swing, you need to evaluate your equipment. Almost all slicers use a driver with too little loft, because they’re reacting to their high, weak ball flight. The new adjustable drivers let you increase the loft and move weight to the clubhead’s heel. Instead of swinging a 9-degree driver and making it 10 or 11 degrees because you hold it open through impact, you want more loft so you can release your hands and turn a 10.5 driver into a 9.

SET YOUR HANDS SO THEY CAN RELEASE

Two grip mistakes make a slice almost inevitable. Many players use a grip that’s too weak–with the thumbs pointing straight down the handle. Make your grip stronger, so your hands are turned away from the target and your palms are parallel with each other. If you drew lines up from the base of your thumbs, they should hit the point of your collar on the right side of your shirt. Also, gripping too tight keeps the hands from releasing through impact. Take a soft grip.

MY 3-PART DRILL TO FIX YOUR SLICE

Ok, you’ve got the right club and the right grip. Our goal now is to substitute the swing loop you’re making–the pull-inside-then-loop-over-the-top one–with a loop that goes in the opposite direction. I used to try to get students to take the club back on an upright plane and then flatten it coming down, but they didn’t change much. I got to thinking there had to be a way for players to start the correct shape earlier, so they had it down through the ball. Turns out, it’s as easy as starting with a simple clockwise circle (from the player’s perspective).

Checking your new grip, take your normal stance, with the ball just inside your front heel. But instead of soling the clubhead as usual, set it in front of the ball. Then make a slow circle with your hands, swinging the club toward the target, continuing above your head and then down and over the ball (above). Focus only on the loop. As you swing, the club will naturally drop onto a shallower plane as it approaches the ball, and your hands will start to release, or roll over.

The next step is to incorporate some body turn into the drill, and to move the start of the loop from in front of the ball more toward your normal address position. Once you’ve grooved the clockwise circle motion (above), keep that loop going and add your shoulder turn. To do that, start with the clubhead behind the ball and lift it up over your head, until your hands are in front of your face (A). Turn your shoulders back and feel the weight of the clubhead, keeping it on the shallower plane you’ve established (B), then swing over the ball (C). You’re making half of a clockwise loop–from the position over your head down to the ball–which keeps the club on the correct inside path.

The last step of the process is the transition from practice drill to real golf swing. Lift the club into a two-thirds backswing position, with your left arm in front of your chest (A). Then make your full backswing turn (B), and graduate from swinging over the ball to actually hitting shots (C). You’ll continue to feel the backward loop that you started in the first part of the drill, and you should immediately see a right-to-left ball flight. It works for any player, at any handicap level. Just take it slow, and do it in parts. I walked the range and helped dozens of slicers at our slice-a-thon, and everybody, from a 20-year-old beginner to a senior woman, got it right away. They could see in five minutes that getting rid of their slice is the first step to playing to their potential.