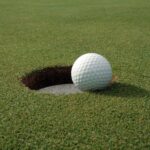 A common question surrounding putting is whether the putterhead is directing the ball in a straight or curved direction. Surprisingly, the answer is both, and it is simply a matter of perspective. Don’t even let it bother you. According to Frank Thomas, “For more consistency, your goal should be to constrain most of the degrees of freedom except for letting the putter move back and through at a comfortable rhythm. This will happen naturally if you don’t try to manipulate the path. If you practice letting your body do what it wants to do, putting is easy. Just let it happen.

2. Know how to curve your putts

According to Mike Shannon, 65 percent of pros and amateurs see in curved lines when putting on the green. For such putters, it is important to know how to read, and properly curve, those tricky putts. The hole should be viewed as a clock face with the focus on where the putt should enter. “Make a practice stroke looking at the entry point you’ve identified on the clock face. Don’t bother tracking your eyes along the arc of the putt. Curved-line putters don’t benefit from sighting intermediate targets, only the target itself.

3. Use your stomach and core when putting

In order to ensure the smoothest putt possible, it is important to putt with more than just your hands and arms. Don’t forget to use your core muscles to control the club and prevent any recoil or excess movement. According to Tom Watson, “You should be able to hold the putterhead still in the finish position for a moment after you complete the stroke. It shouldn’t rebound. You get this stability by using your core muscles to control the club. Feel as if your stomach is turning toward the target as the putter moves through impact.

When putting, you want to give the ball a firm strike, but not a hard smack. Focus on a roll rather than a hit. According to Dave Stockton, in order to do this, “take an open stance, your weight slightly favoring your left side and your putter shaft leaning toward the target. The open stance makes it easier to feel the left hand going out and down the target line. The forward lean offsets the 4 degrees of loft I recommend for a putter and helps the ball roll smoothly.

5. Putt with your left ear

Butch Harmon cites looking up too soon as the main reason golfers miss short putts. “When you peek, your head moves, which often causes the putterface to open or close — just a touch, but that’s all it takes. With short putts, there’s not much room for error: If you start the ball off line, you’ve missed the putt.” Harmon’s remedy to this problem involves two steps: aim the putterface precisely, and keep your eyes down until you hear the ball drop into the cup with your left ear.

6. Experiment with different grips on short and long putts

Long putts and short putts are clearly quite different in terms of how much exertion one puts on the ball, but a change in grips may help. Reigning Players champion Rickie Fowler, for example, enjoys using two different grips: a standard grip on long putts, and a cross-handed grip on closer ones. “Sometimes a change like this simply freshens the mind, but when I saw it on camera I could see the switch was actually improving my stroke, with the putterhead staying on line through the impact zone longer.

While egotists may not allow themselves to use a belly putter in public, just simulating one may be helpful on the greens. According to Rick Smith, “The key (with a belly putter) is that the butt end of the grip remains anchored in the same position in my stomach throughout the stroke. When you hit a putt with a standard putter, the same principle applies: The butt end should always point to the same spot on your body.” Read more about this strategy here. So, now you have all the perks of a belly putter without having to hear the snarky comments of your playing mates.

8. Just don’t think about it

Though it may feel necessary to line up and practice those short putts, don’t do it. This may lead to you second-guessing yourself, so try to break such a habit. According to Sergio Garcia, “I haven’t counted, but the whole routine from setup to putt probably takes a total of 10 seconds. In golf, the more time you spend thinking, the less smooth you become. You get tight and start to second-guess yourself, so I try not to stand over the ball too long.

9. Be firm on the short putts

Though it may be nerve-wrecking to watch a short putt skate past the cup, a firm putt in any given situation is more effective. Never feel the need to tell the ball “Go in!” by simply maintaining a steady stroke on the short putts. According to Butch Harmon, “Here’s what you need to do: Keep your eyes down, and give the ball a nice, firm strike. The putt’s probably not going to break, so aim the face straight at the hole and make sure you see it hit the ball. If you get in a habit of staying down and listening for the ball to drop, you’ll be automatic on these little putts.