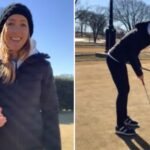 “Every putt is a straight putt” is an old adage that’s been used for years. While it’s not true in a literal sense, the idea is a good one in terms of thinking about hitting a straight ball on every putt, and allowing the slope of the terrain make the ball break toward the hole.

You don’t need to move the putter face to steer the ball one way or another. Instead, think of what it might look like to putt a ball down the middle of a yardstick. The ball would have to start straight or else it would roll off of the side of the yardstick.

The key to hitting a straight putt is in the position of your putter’s face. The putter’s face at impact has a very large influence on the starting line of your ball, and if the face is open or closed, the ball will start wherever it’s pointed.

How you control the face varies with each individual, but here’s one way to figure out what works best for you.

Putt with one hand at a time for several putts in a row. Get a sense of the differences between hands. Does one hand like to push more than the other?  Is one hand “bossy” and tends to take over? Can you control the face better with a different posture over the ball, or a different position with your arms?

Use your practice strokes to give you some idea about what feels most reliable as a way to deliver the ball repeatedly down your start line. You should make more consistent contact right away, and with practice, a lot more holed putts.