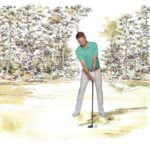 It’s an awesome feeling when you drive it great, stripe your irons, hole a bunch of putts and post a score in the low 70s. But if you want to do that regularly, you’re going to have to rely on more than just solid ball-striking and a hot putter. All good players have a variety of specialty shots that they use around the course to turn bogeys into pars and pars into birdies. They might use them only once a round, but if executed properly, these shots often are what make the difference between a good score and a great one. Here are six that will get you down to scratch. –with Ron Kaspriske

Good players opt for a shorter-but-reliable fade when they need to find the fairway. But scratch golfers know how to find the fairway without sacrificing too much distance. If you want to score, you can’t afford to be 200-plus yards away from the green. You need some roll. The baby draw is the shot for you.

Tee the ball so only a tiny bit is above the clubface when you sole your driver. Grip down an inch and set up so the ball is an inch farther back in your stance than your stock drive. One more thing at address: Drop your trail foot away from the target line about six inches. Now you’re in position to swing down on an in-to-out path in relation to your target—key to drawing it—and hit the ball with a slightly descending blow, which will get it to fly lower. Make an abbreviated swing, feeling like you go back to the 10-o’clock position with your arms and through to 2 o’clock after impact.

Good players can hit a 3-wood a long way and reach most par 5s in two. But what they can’t do is hit it high enough to hold a green or access a tough pin location. Scratch golfers can launch a 3-wood way up and get virtually all of their yardage from the carry.

To hit this moon shot, start by setting up with a slightly open stance and play the ball nearly as far forward as you would for a driver. Also, tilt your upper body away from the target at address. All of these adjustments help add loft to the shot. Two things need to happen when you swing. As the club starts down from the top, feel like you increase your upper-body tilt away from the target, and swing faster than normal through the impact zone. Your arms need to feel super relaxed while your legs feel braced—think, spaghetti arms and steel-rod legs.

Good players expect to hit the green when they have a wedge in their hands. Scratch golfers expect to hit it close. You might be pretty good from full-swing distances, but you also need the ability to take something off the shot when you’re between clubs.

To do that, open the face of your wedge slightly and then grip down on it about an inch. Now here comes a big change. However wide you typically stand for a wedge shot, cut it in half for this shot. These adjustments let you make your normal swing, but the ball won’t fly quite as far—and that’s key. The mistake is to swing slower, which makes it harder to get a consistent yardage. Stick with your tempo.

Good players can consistently land pitch shots close to their target, but scratch golfers can land it close and get it to stop quickly. A checking pitch that takes a few bounces and stops dead allows you to be super aggressive around the greens.

The shot you want to learn is my low, hooking spinner. Set up with your weight favoring the foot closest to the target, but address the ball just forward of center. This swing requires soft wrists. You hinge them going back but release that hinge as the club moves through impact, so you’re actually shallowing the club’s path in the downswing. The key is to swing down from the inside and make contact with the ball slightly lower on the face than the sweet spot. That produces the spin that makes the ball stop after a few bounces. To get that hooking action, make sure you keep rotating your body toward the target, and feel the clubhead pass the hands through impact. The mistake is holding off the release.

Good players have a consistent technique in greenside bunkers, and it works well in most situations. But scratch golfers can change their swing to overcome difficult lies, especially when they need to get the ball up quickly.

To get out of any bunker, open the face of the wedge super wide before you take your grip, then swing with as much speed as you can muster: full backswing; full follow-through. It helps to play the ball a little forward, but if you have the face open enough, you won’t have to be as precise with where the club enters the sand. The open face and fast/full swing will create the spin and higher trajectory needed to plop the ball near the cup.

Good golfers know how to hook or slice a ball around trouble, but often the shot doesn’t curve enough to get back on line, or it doesn’t give the obstacle a wide enough berth. Scratch players know how to make the curves big enough—like 50 yards of curve—to easily avoid trouble and get the ball to land by their target.

To hit the big hook, first determine your target line as if you were playing a straight shot. Then close the face of your club significantly in relation to that line (the face pointing way left of the target line for a right-hander). Next, take your grip, but adjust your setup so your body and feet are aligned significantly away from the trouble you’re trying to avoid (for a big hook, righties would set up way right). Keeping adjusting until your closed clubface now matches the original target line. Then make a swing along your stance line and watch the ball hook like crazy. The opposite adjustments would be made for a slice. Open the clubface wide, take your grip, and stand on a path that would easily clear the obstacle, but make sure the clubface is pointing on the target line as if you were hitting a straight ball. Learn these shots and you can turn double bogeys into pars—and get your handicap down to scratch.

Editor’s Note: This article appears in the latest issue of Golf Digest. For more great instruction, make sure to check the digital edition of our latest issue.