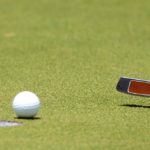 Recreational golfers are lousy putters, as a bunch.

That generalization might sound a little harsh, but according to data collected by Shot Scope, a U.K.-based shot-tracking system, golfers with a single-digit handicap average 32.8 putts per round. Players with handicaps from 10 to 17 average 35.1 putts, while the typical golfer with a handicap between 18 and 28 needs more than 37 putts to complete 18 holes.

For comparison, every PGA Tour pro ranked inside the top 207 in the category averages fewer than 30 putts per round, typically on faster and trickier greens than amateurs play. Heading into the Masters, Justin Rose led the Tour in number of putts per round with 26.8.

To putt well, a player must gauge how hard to hit the ball and read how it will curve based on the humps and undulations on the putting surface. Speed control and green reading are skills that generally improve with experience and with lessons from a certified instructor, but using a properly fitted putter is also critical.

Finding your perfect putter involves a lot more than just rolling a few balls across the pro shop carpet or buying the same club your favorite pro uses. These six steps, along with the advice of a good custom fitter, should help you find a wand that brings some magic to your putting.

6. Make sure the length is ideal

Before you worry about anything else, you need to ensure your putter’s length is ideally suited to the way you stand over the ball.

Most putter makers offer stock options in 34-inch and 35-inch models, and there are some 33-inch putters on the market too. A good custom fitter can reveal exactly how long your putter should be. If you are between sizes, such as 34¼ inches, for example, a fitter easily can trim the shaft, re-grip the club and make it perfect for you.

A putter’s lie angle is measured in degrees. A 90-degree lie angle would have the clubhead parallel to the ground with the shaft pointing straight up, a setup that is against the Rules of Golf. Still, your putter will be the most upright club in your bag, and most putters shipped from the factory have a lie angle around 70 degrees. By comparison, drivers typically have a lie angle between 56 and 60 degrees, and a 7-iron usually will be around 62 degrees.

The proper lie angle allows you comfortably to get into a good posture over the ball and, when coupled with the ideal length, will help ensure your eyes are directly over the target line or slightly to the inside, as some players prefer.

When a right-handed player has a putter built with a lie angle that is too upright for the player’s setup and stroke, the toe of the club tends to come up, and putts tend to miss to the left. Conversely, using a putter with a built-in lie angle that is too flat for the player’s setup and stroke often causes the heel to come off the ground and can lead to misses to the right. Both problems can lead to inconsistency unless the player adjusts his setup or stroke. The problem can be subtle on short putts, and it manifests more on long putts.

To discover your ideal lie angle, a fitter likely will ask you to stand over a ball as if you are about to putt, with your arms hanging directly below your shoulders. From there, he or she will put a putter in your hands and look to see how the head rests on the ground. If the toe appears to tip up or down, the lie angle can be changed. If the sole of the putter rests flat on the ground, you’ve got the right lie angle.

When golfers think about loft, they usually think about their driver, fairway woods and wedges because those clubs have lofts prominently displayed. Despite their typical appearance, putter faces have loft, too, which helps lift the ball from a small depression created by its weight on the green’s surface and get it rolling quickly. The trick is matching your putter’s loft with the way you deliver the face to the ball at impact.

Putting with a club that has too much loft will turn putts into mini chips and impart backspin, making the ball bounce and hop after you hit it. And if a putter does not have enough loft, the ball will be driven down at impact and then pop forward, leading to inconsistency and a poor roll.

Standard lofts vary by brand, but most putters come with between 2
and 4 degrees of loft. Golfers who have a forward press and make impact with their hands well ahead of the ball or who use the arm-lock putting method will need more loft, because their motion de-lofts the club. For example, Matt Kuchar uses an arm-lock style Bettinardi putter and requires 5 degrees of loft.

Golfers who contact the ball while their putter shaft is perpendicular to the ground, or those who tend to hit putts on an upswing, need less loft. Zach Johnson won two majors using a SeeMore putter that had just 2.5 degrees of loft.

The loft of nearly every putter can be changed easily, and fitters can use high speed cameras and different fitting devices to determine the precise amount of loft your putter requires.

Getting a putter with the proper length, lie angle and loft puts you in position to make a good stroke and be more effective on the greens, but a putter with the wrong face balance can work against you during your stroke.

Some players naturally swing their putter back in a relatively straight line, while others create either a subtle or pronounced arc by swinging the club inside the target line on the backswing, squaring it in the impact area and then closing the face on the follow-through. A putter’s balance can work in harmony with that motion or work against it based on the shaft axis and the head’s center of gravity.

If a straight line extending from the shaft into the head bisects the center of gravity, the putter’s face will point straight up when you balance it in your hands and the putter is said to be face-balanced. It will be ideally suited for a straight-back, straight-through putting stroke.

The farther the center of gravity is toward the toe and away from the line of the shaft axis, the more the toe will hang down. Putters with a small amount of toe hang (20 to 40 degrees) tend to work well for golfers who have a slightly arced stroke, while players who make a strong arc perform best with a putter that has at least 45 degrees or more of toe hang.

This is the only part of the putter you touch during a stroke, and each player develops preferences when it comes to grips.

The trend over the last decade has been toward larger-diameter grips, because as greens have become faster, many golfers want to quiet their hands during the stroke. Big grips often help golfers reduce twitching and make a less wristy swing.

At the same time, many players like the feel of thinner grips because they believe it enhances touch.

Some grips have been designed to hold extra weight, counterbalancing the weight of the head and shifting more overall weight either directly under a player’s hands or to the top of the handle. Adding weight in these areas has helped some golfers develop a smoother, more rhythmic putting stroke.

A good club fitter will have many grips available to try, and as long as your grip pressure is not excessively tight or loose, your ideal grip comes down to personal preference.

Companies are making more putters than ever, often with subtle balance variations between them, so if you find one that catches your eye the chances are good that it comes in a version that matches your needs. But is there an inherent advantage of using a mallet or a more traditional blade?

Sean Toulon, Odyssey’s general manager, agrees and adds that he would recommend a model that has a high moment of inertia.

The higher a putter’s MOI, the less apt it will be to twist on off-center hits and the more forgiving it will be.

Heel-toe-weighted blade putters tend to emphasize feel and control. They have a classic look that many accomplished golfers love and traditionally had less MOI than mallets, but in recent years many blades have come to market with extra perimeter weighting that boosts their MOI and forgiveness.

The bottom line when it comes to putters is that if you work with a fitter or a PGA of America pro, it has never been easier to find a club that will accentuate the good things about your putting stroke, compensate for your shortcomings and please your eye.

This story originally appeared in the April 2019 issue of Golfweek