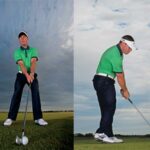 Many of you would probably give up red meat if you could consistently hit a sweet, little draw. If you’ve struggled for years trying to get the ball to start just right of the target and curve back to it, stop blaming a lack of ability. It might be a lack of understanding for how this shot is created. For instance, you might have been taught that to hit a draw, your clubface has to be facing left of your target at impact. That is incorrect. You also might have been told that the path of the club through impact is what determines the ball’s initial direction. Also wrong. Thanks to a company called TrackMan, which developed a “golf radar” that can record and measure any part of a golf swing and the ensuing ball flight, we now have indisputable science on what produces a draw. I want to share these findings with you, and give you some advice on how to adjust your swing to take advantage of them. You’ll be drawing the ball with ease in no time.00:00:41 / 00:01:08

THE NEW SCIENCE OF HITTING A DRAW

Here’s the first revelation: The starting direction of your shots is overwhelmingly determined by the position of the clubface at impact–not by the swing path. Path plays a part, yes, as do other factors, such as the amount of spin on the ball and the quality of your lie. Just remember that the clubface is the biggest factor. Knowing this, you can assume that the face has to be open (pointing right of your target) for you to start the ball to the right–the first part of hitting a draw.

Here’s the second revelation: What makes the shot curve toward the target is the path the club takes through the ball. The path has to go more to the right than the face is pointing. How much more depends on the club you’re using. For simplicity’s sake, if you’re swinging a 6-iron, think of it as a 2-to-1 relationship. That means if the face is pointing 2 degrees right of your target at impact, the path has to be on a 4-degree angle right of the target line (above). If the ratio were 1-to-1, the ball wouldn’t curve. If it were 4-to-1, the ball would draw too much.

Increasing the club’s loft makes it harder to hit a draw. So if you were using a wedge, the ratio would need to be about 3-to-1. But if you were using a driver–the lowest lofted club in the bag–it would be roughly 3-to-2. In every case, though, the clubface has to be closed to the path–not to the target.

THE ONE DRILL YOU NEED

You might think the body’s position at address and impact should be the same, but it’s the differences that are essential to hitting a draw. Notice in these photos (above) how the club’s shaft is leaning more toward the target at impact than it was at address and the clubface is slightly open. This comes as a result of shifting the hips laterally toward the target on the downswing. This forward shift promotes the in-to-out path and open clubface required to hit a draw. Practice getting in your setup and rehearsing this lateral shift of the hips to get a sense for where your body should be at impact. Then try to re-create this position when you hit shots. You’ll groove the correct path and face angle.

KEYS TO THE DRAW

4 STEPS TO OWNING THIS SHOT

These easy adjustments to your swing will get you routinely hitting a draw:

1. Drop your right foot back an inch or two at address. This creates room on the downswing for the desired in-to-out swing path, which is essential to producing a draw.

2. Feel like your hands are moving more around your body–instead of above it–during the backswing. Do this correctly, and it’ll feel like your hands have swung behind your right shoulder. This also makes it a lot easier to deliver the club on an in-to-out path and promotes the slightly open clubface you need at impact.

3. To start down, shift your hips toward the target, and hold back your shoulders as long as you can. This will prevent the common fault of spinning the upper body toward the target and shifting to the back foot, which causes the swing path to become out to in and shuts the clubface. The result is a shot that starts left and often slices.

4. Minimize forearm rotation through impact. This idea often gives golfers pause, but excessive forearm rotation toward the target causes the face to shut prematurely. Remember, the face has to be pointing right of your target at impact. That’s what starts the ball to the right and sets up the draw.