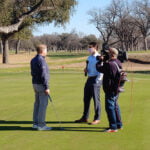 Number of golfers rising during pandemic as more kids, families taking an interest

SAN ANTONIO – Over the past year golf has become more and more popular and that influx of players is not slowing down.

Since the COVID-19 pandemic began there are now more players in San Antonio and a wider variety of golfers, and that means big local projects on the horizon for Alamo City Golf Trail.

“I’ve been playing like 30 years on and off, but not as much as I’m doing now,” Julio Ortiz said.

Ortiz was one of the first golfers out on the tees Wednesday at Alamo City Golf Trail, but he was far from the only one.

And it’s not just the number of people that is encouraging to local golf enthusiasts.

“Any money that we make on a year-in, year-out basis gets reinvested back into the golf courses,” Peterson said.

Of the projects on the horizon, there is a $3.5 million game plan for the Olmos Basin public course that is completely self-funded by the proceeds from last year’s business.

For many golfers it’s not just about a potential hole in one, and it’s not about the fresh air to start the day, it is about so much more.

“It tests yourself. It gives you a little bit of an opportunity to see what your inner resolve is all about. But at the same time too you get to spend time with people you really like,” Peterson said.

And the hope is that the trend will continue into the future.

“I think the future’s bright, because we’ve got so many different people that are playing the game,” Peterson said.