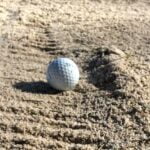 Superintendents work hard to provide good bunker playability and presentation, but the maintenance team can only do so much. Once they have completed daily bunker maintenance it’s in our hands as golfers to keep bunkers looking and playing great. Doing a good job raking bunkers is an easy way to maintain good playing conditions for everyone and it’s a great way to demonstrate care for the course.

The ultimate goal of raking a bunker is simple – use whatever rake is provided to produce as smooth of a surface as possible. This includes raking your footprints and whatever disruption was caused by the golf shot. In addition to this basic goal, there are a few other things to keep in mind while raking that can help maintain the bunker and surrounding grass areas:

As you play different courses, you will likely find different rakes being used. Courses choose different rakes for a variety of reasons including price, the type of sand they have, the type of playing surface they want, and the appearance of the rake itself. The type of rake shouldn’t influence what we do after hitting a bunker shot – enter from the low side, smooth the surface as uniformly as possible, exit from the low side, knock the sand off your shoes and then go make that par putt!

Originally posted by the USGA