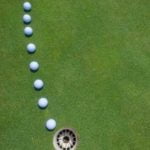 We’ve all been there. We know what it’s like. You’re standing over a makeable putt — maybe it’s for birdie, or for a clutch par — so you decide to give it a little something extra. You hit the putt firm, watch as it rolls towards the hole… and then groan in agony as it slams against the lip and bounces away. So unlucky!

Many golfers take it as a given that, if they really want to make a putt, they should hit it hard. “Never up, never in,” and all that. But that’s only true if you’re in danger of leaving your ball short of the hole. You want to make sure your ball gets to the hole, of course, but you don’t want be trying to smash your ball into the cup. Turns out that may actually make holing the putt even harder and causing more lip-outs, according to Trackman Golf.

The graphic below may seem a little daunting, but sitting in the top left is some rather interesting information.

Do you have a golf buddy who should practice putting? Here are some TrackMan Putting Stats 🤓 #TrackManPutting #PerformancePutting #UnleashYourPotential

Why? Because gravity will take over. A slow-moving ball entering on the side of the hole will simply drop down in, whereas a fast-moving ball will use its forward momentum to catapult around the lip.

According to the data above, on a flat green rolling about 10 on the stimp meter…

If you like to hit your putts firm, you can — you just need to make sure you hit the center of the hole because you have less room for error.

Fascinating insight from Trackman Golf, and something golfers should keep in mind the next time they’re on the green.